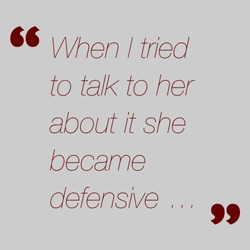 Many workplace issues, if dealt with early, can be resolved.  However, there are times when third party intervention can be the only answer.  The following is a real life scenario where workplace mediation helped to prevent a situation escalating to the point of a break down and minimising the impact on everyday business:

“She was very difficult to work with, she made errors, she didn’t read instructions properly and everything became very confusing as a result.  When I tried to talk to her about it she became defensive, aggressive really, sending me comments to my notes in RED BLOCK CAPITAL LETTERS, telling me I’d given the wrong instructions.  Everyone was working flat out at the time so I just got on and made the best of it but it was a nightmare experience, tip toeing around her.  Once the project was completed I was inclined to let it lie and probably would have if I wasn’t going to be working with her again quite soon.  Because of this I decided to give her some feedback by way of an email, on my experience of the process.

I thought my email was respectful, I gave specific examples, didn’t use any language that could be construed as rude or emotive, it definitely wasn’t an attack on her personally.  I even asked a colleague who had no stake in the project for his opinion before I sent it.

Within five minutes of pressing send I got an email back from her, telling me she didn’t like my attitude, that I was rude and unprofessional, lots of block capitals and exclamation marks.  I was astonished, I felt quite sick it was so aggressive.  I was on the verge of sending her an angry email back when a colleague told me to take a breather.  He was very calming, he told me not to respond so quickly and take some time out to think about what would be achieved by an angry email and to consider the outcome I really wanted.

After thinking about it I decided that not much would be gained by buying into this email exchange but I couldn’t bear carrying this stuff with me.  It made me feel miserable and it was unfair.  So I reluctantly spoke to my manager, I felt bad about that, she had so much on at the time.  She was good though, and suggested we got someone to facilitate a meeting between us.  My manager suggested it should be someone who wasn’t directly involved in our work and who would take an independent approach.

The woman wasn’t keen on a meeting, she said there was no reason, and she didn’t want other managers involved talking about her.  My manager sorted it and got her to agree to mediation, I think this may have been because of the assurance of confidentiality.

The Mediator was fantastic, he encouraged us to look at each other’s point of view, what we needed from each other, what would make it better for both of us, at the end I think we were both reassured and had a clear agreement to work to as the way forward.

I can’t bear to think what would have happened when we started on the next project if we hadn’t had the mediation.  We’re not big buddies but we get along fine and have a clear understanding of what the other one needs to work together.”